I LOVE my Shamrock

Well, the good news is that you will be familiar with all of the systems when you finish. LOL. Mine does not have a genset and I can't figure where it might go except right in front of the two motors against the bulkhead, but it would surely be tight. The upper bunks are simply the backs of the lower seating. The backs are hinged and lift up and are supported. I am 1000 miles from my boat right now, but by the end of the first week in October, I should be able to get you a photo or two. Ed, my name is bill.
N

Yankee said:
I have a 31 GS and if I can get some of your questions answered, don't hesitate to ask. My motors are twin 315 hp Cummins, and they do move this girl.Where are you now? East Coast?
Click to expand...

Yank, do you know of the transom on the GS31 is wood cored or solid glass below the water line? I am considering installing under water LED's and a swim platform, but if its wood cored I don't want to disturb it.

I just purchased a Shamrock 20 Pilothouse and Love it! I just began the process this week of a full restoration. She will be painted, rewired, the Perkins 4.236M diesel has been pulled and will be gone through, and new electronics will be added. I will share photos along the way. I actually do not have too many photos of her before I began this week after purchasing her last week, but here is a smiling Javier aboard and ready to work.

I haven't seen too many full restorations of the PH Shamrocks, so I will be as descriptive with photos and information along the way. I am in San Diego and if any Shamrock fans want to come take a look, just let me know.

If you would like to see one, you can go to classicshamrock.net and on the pictures page look for STEVES PH RESTORATION.
L

I love my Shamrock too.

The only part of my 1974 20' CC that isn't working beautifully is the gas gauge. It reads less than I actually have in the tank, so I wasn't sure how much was in it on Nov 5th when I wanted to haul it out for the season. So my mechanic buddy and I went for a ride to empty the tank of ethanol gas and replace it with 5 gal of non-ethanol before we winterized it. After riding for about 25 minutes, the gauge hit E but I had a feeling we still had a way to go. I noted the time. We ended up running for a total of 2.5 hours, almost all that time going 30 rpm, somewhere around 29 mph. We slowed down 3 times for just a few moments to let our brains stop rattling from the wind and the roar of the straight exhaust. Just when we thought we should've packed a lunch, it finally ran out. We added the non-ethanol gas and headed for the trailer. Later I charted our course. We went 50 miles, mostly on empty!

We both agreed that was the hardest we've run that engine since we installed it in 2004. It ran so beautifully, never skipping a beat. I'm convinced this PCM 351W with my beloved Edelbrock 1409 4 bbl carb runs better than the 351W my dad put in this same boat in 1975. I say that mostly because he stuck with the God-awful Holley 4 bbl which idled up and had so many stupid issues. The best thing I've ever done for this boat was taking the Holley out back, shooting it and installing the Edelbrock.

I love my Shamrock! And I've never been more confident in it (other than the gas gauge!). My dad died in 2003 but I know he's up there somewhere watching. And smiling.

I'd rather have the gauge reading wrong in the direction that yours is reading than the other direction. At least you won't run out thinking you still have gas in the tank.

I had a nice (cold 49 degrees) sunset run up the river tonight in Yarmouth Maine. Summer is all in front of us.! 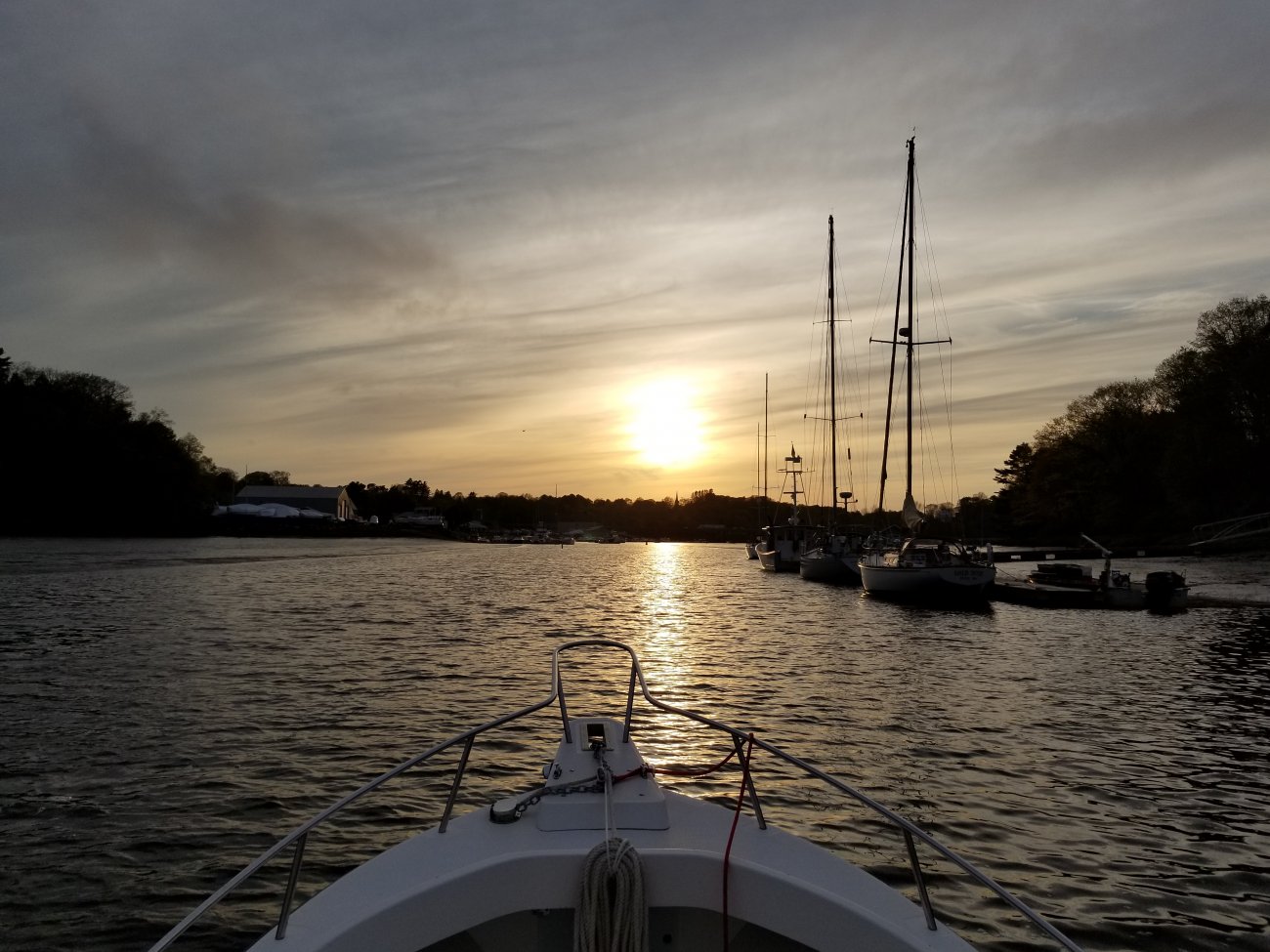 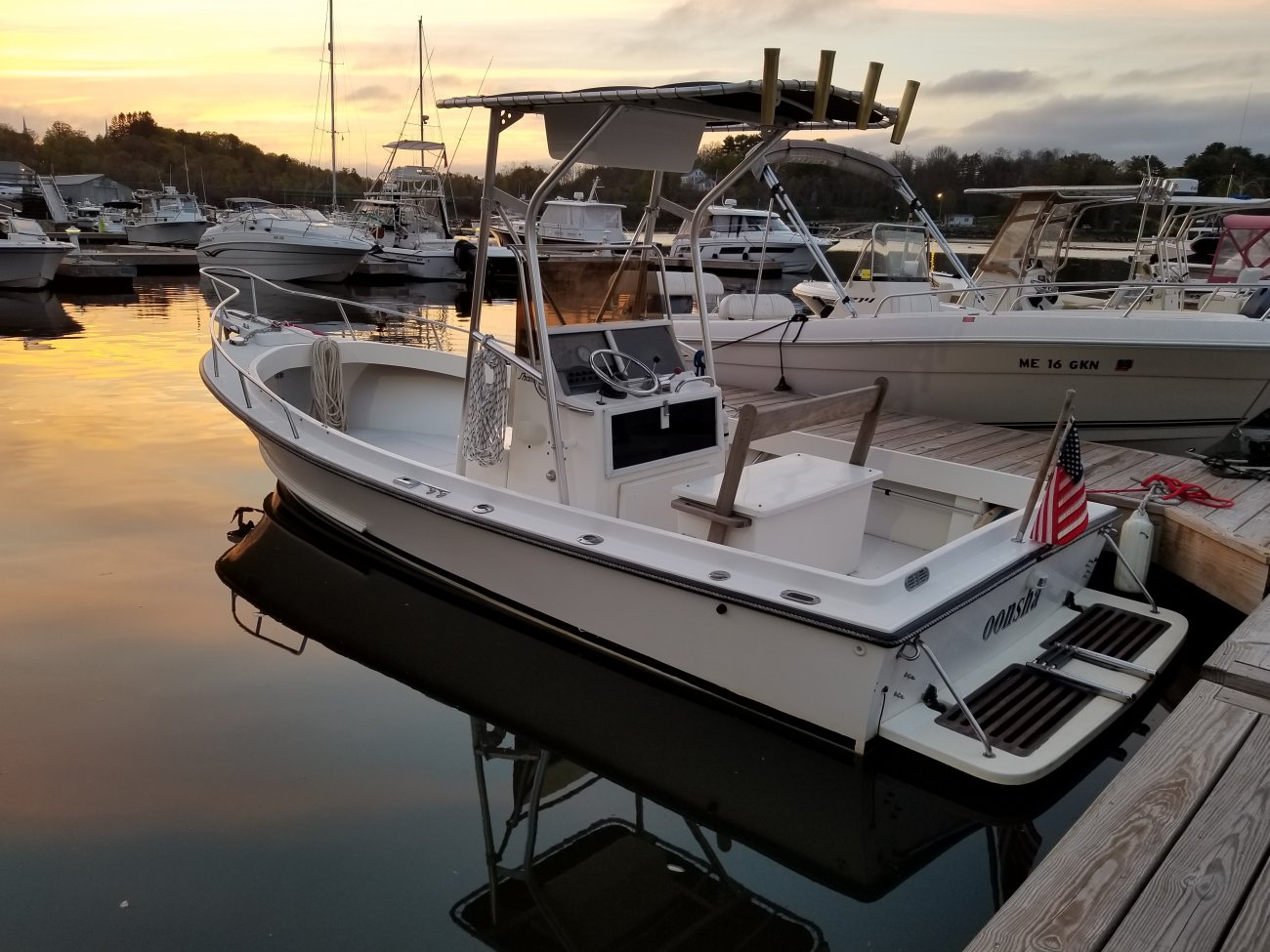 ParkerMaine, beautiful pics! What year is your boat? My ‘74 is still on jack stands but getting closer to launch. Waxed it and painted bottom Tues night and it’s been raining here in MD ever since. Supposed to continue until Sunday.

JulieH said:
ParkerMaine, beautiful pics! What year is your boat? My ‘74 is still on jack stands but getting closer to launch. Waxed it and painted bottom Tues night and it’s been raining here in MD ever since. Supposed to continue until Sunday.
Click to expand...