In the spring our lake was hit buy what seemed to be a micro burst. It leveled out dock and a neighbors as well as tore up a brand new roof at a nearby church. Some on here expressed interest in the rebuild process so here it goes.

Day of the incident. Luckily my nieghbor was able to get the drain plugs in the boat prior to it sinking. 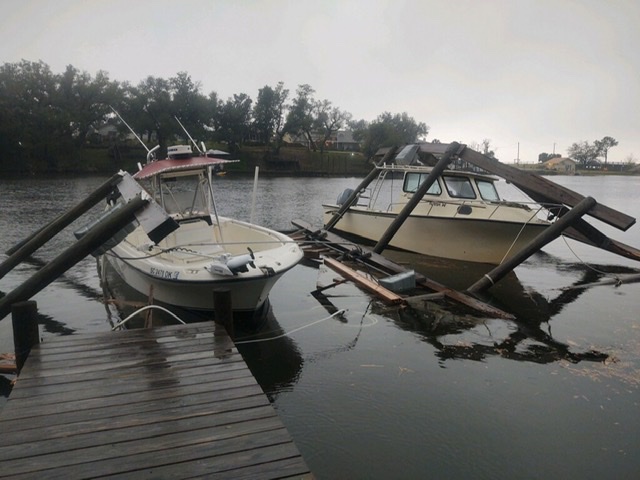 We cut the boats out with a chainsaw and battery grinder. It took a little more than half a day. I spent that evening cutting up everything that appeared might float off and hauled it to the street. 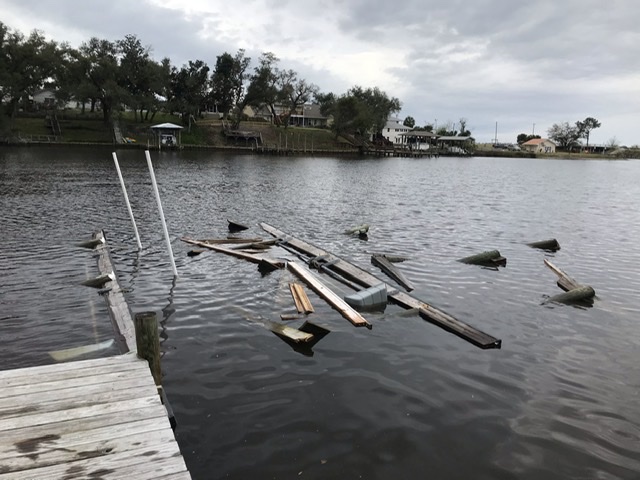 I returned a couple weeks later to finish that job. Talk about a lot of work! We have one of the higher elevations in Panama City, that sure wasn't helping us this day. Given the cost of materials these days I salvaged most of the old decking. You can see the old pilings that were drug up the hill by truck. 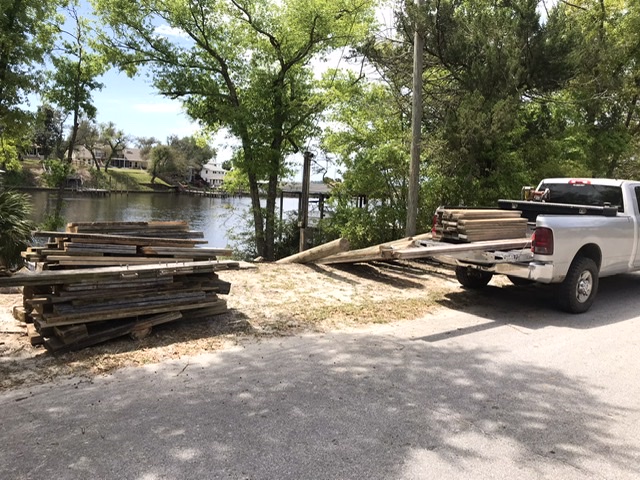 I did not get pictures of it but moving the steel cradle was an ordeal. Involved the Geenoe, an inner-tube and lots of rachet straps.

Now that the way was cleared, we called in the dock company. They are all booked more than a year out. We got lucky and found a guy between jobs. The first order of business was removing one piling that broke off at the waterline. The others had broken off at the mud bottom. 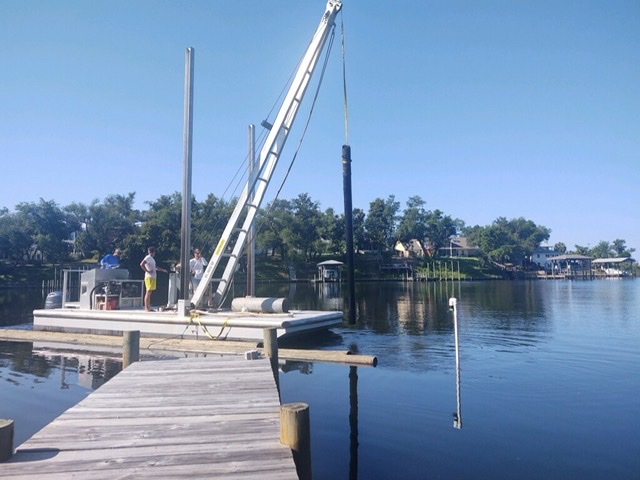 Then they started installing new pilings. We kept the same footprint but upgraded to four pilings each side. This would be required to eventually install a roof over the boats. They used a water jet to blast a hole in the mud for the piling, and then drove it down with the bell shaped hammer. Each piling was 35 feet long to start with and was driven at least 10 feet into the mud. 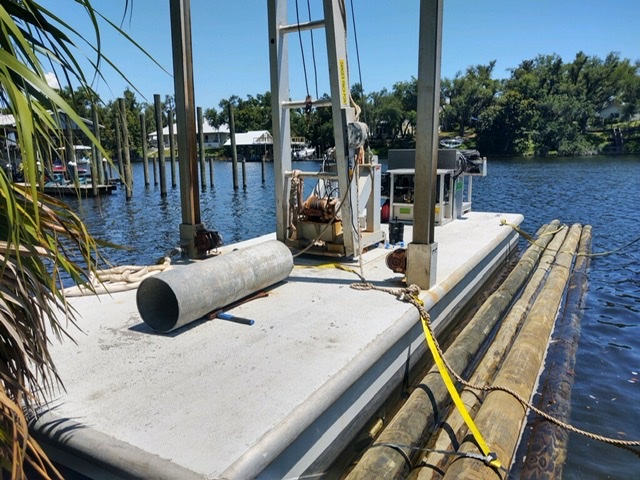 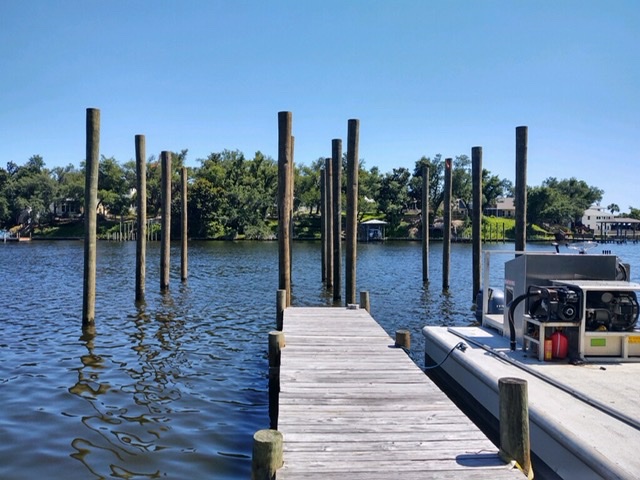 The next step was called banding the pilings. Basically tying them all together over each slip. We had redone this on one of the slips a couple years before so we knew how much of a pain it was to set up all of the scaffolding. A few weeks later the same contractor had another gap in the schedule and was able to knock this out. 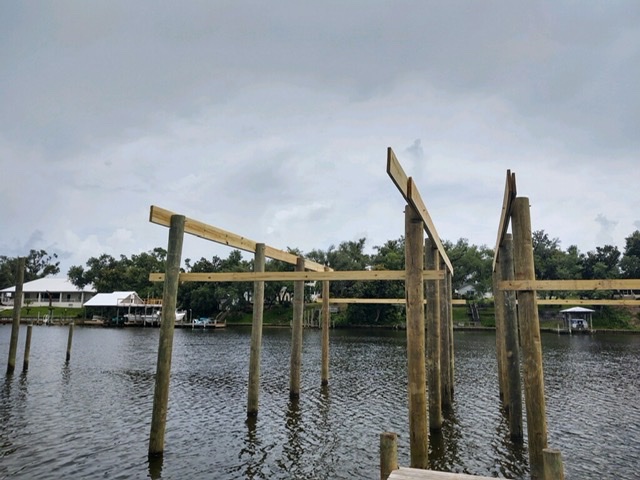 We took over the project at this point. The decking has always required lots of maintenance. Decided we would do it the right way with rough sawn marine grade lumber and stainless through bolts.

My wife and I used a water level to set all of the cross pieces. Again working off the geenoe ratchet strapped to the pilings. 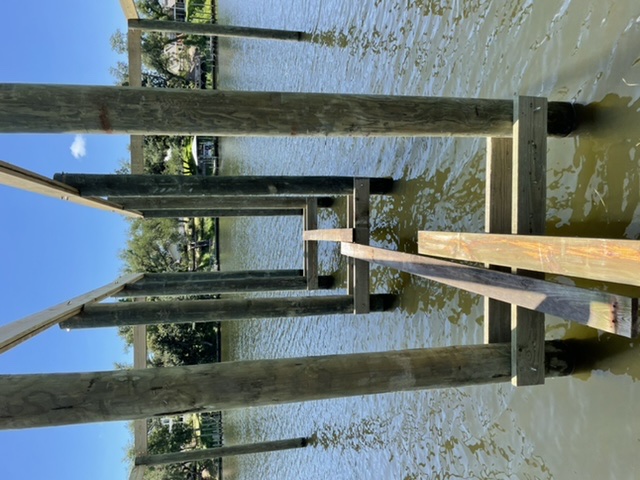 I bought this Stihl drill at auction for $25. This was an awesome tool for this project.

For the next level decided to do something a little bit different. Normally these just butt up to each other and are screwed down to the board below. Decided to overlap each one as well as through bolt all through the piling. 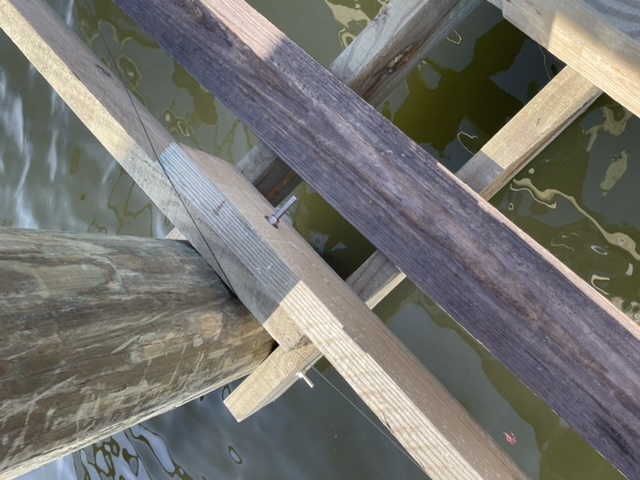 Once this was complete started put putting deck down. We used up all of the salvage deck first. 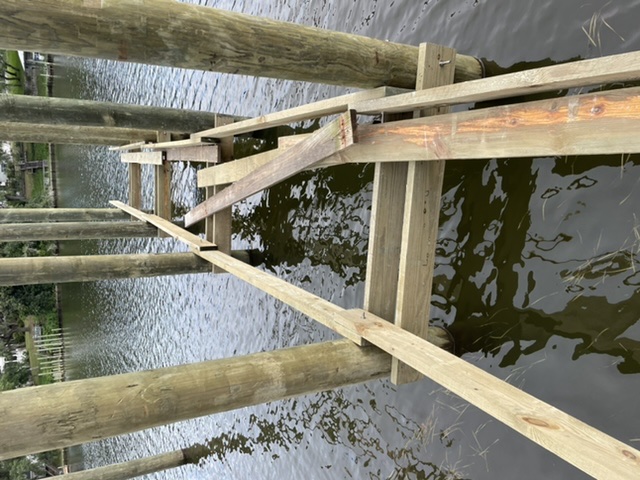 All the above took a whole day. Was able to get the deck completed the next day. I should mention the deck boards were spaced wider than they were previously. They were also installed with 4 inch stainless steel screws. 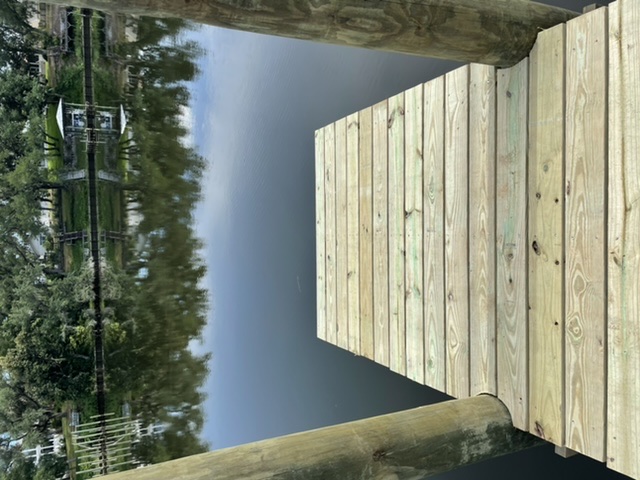 That represents about a weekends worth of work. Still needs the boatlifts purchased and installed. I’m trying to find a used side mount set up for it. I anticipate that to take another weekend to get the lift installed and power run to it.

Had to rebuild my slip cradle here in Pensacola after Hurricane Sally destroyed most of the marina. Was really fortunate to have use of a small barge for the assembly and tuning the bunks to my 246 Open. Good luck with yours… it looks phenomenal!

After some delay due to changing jobs The work continues. I found a used to lift at auction in Tampa and purchased it in Nov. Got it cheap, and felt that justified the 18 hour drive to go get it. It’s older but looks Pretty heavy duty has aluminum cradle beams. 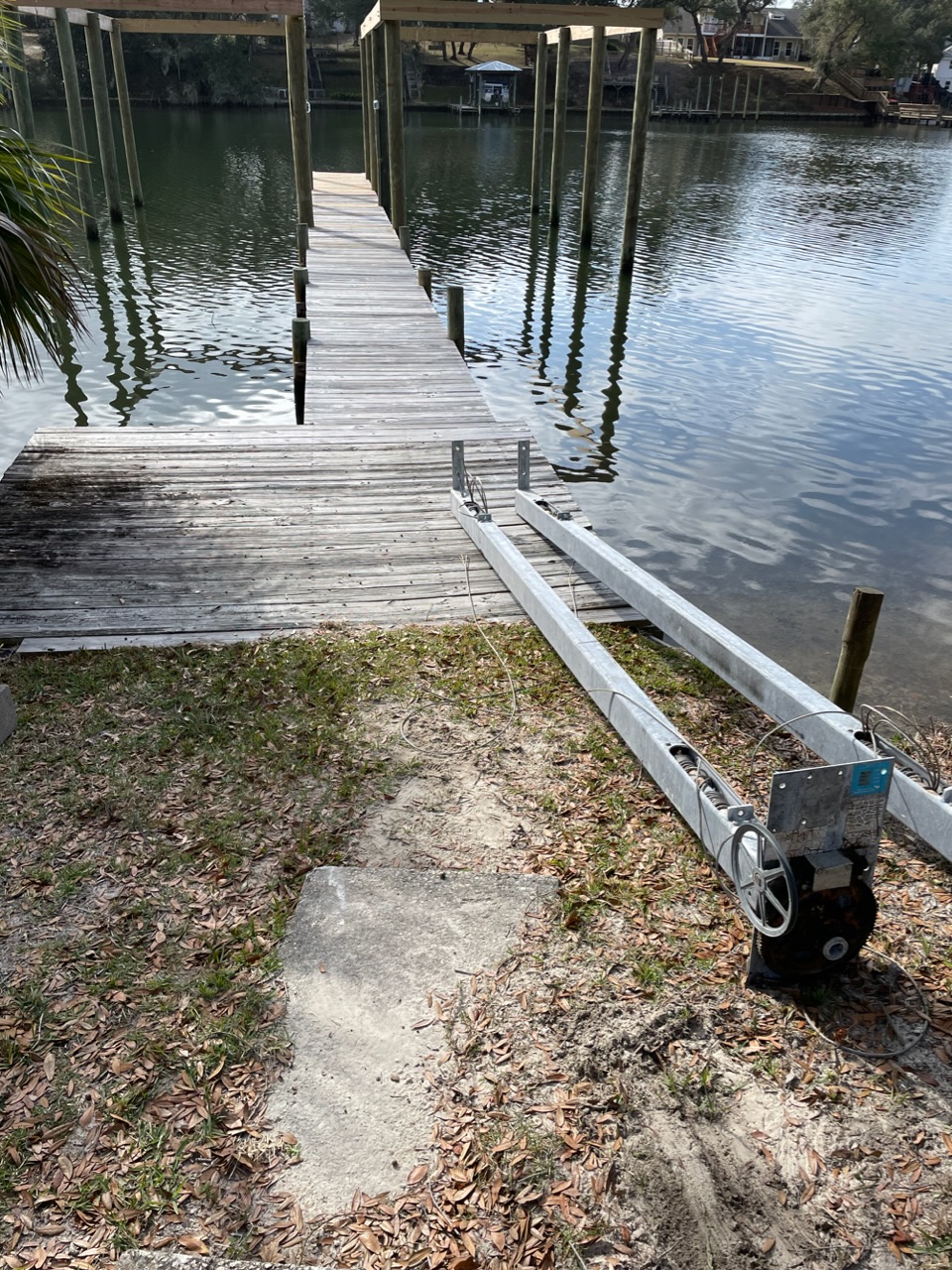 After wrestling these off the trailer and down the hill, the first major obstacle was figuring out how to get them hoisted up. Being in the panhandle be resorted to redneck rigging as a friend called it. Ultimately winched it up from the street. 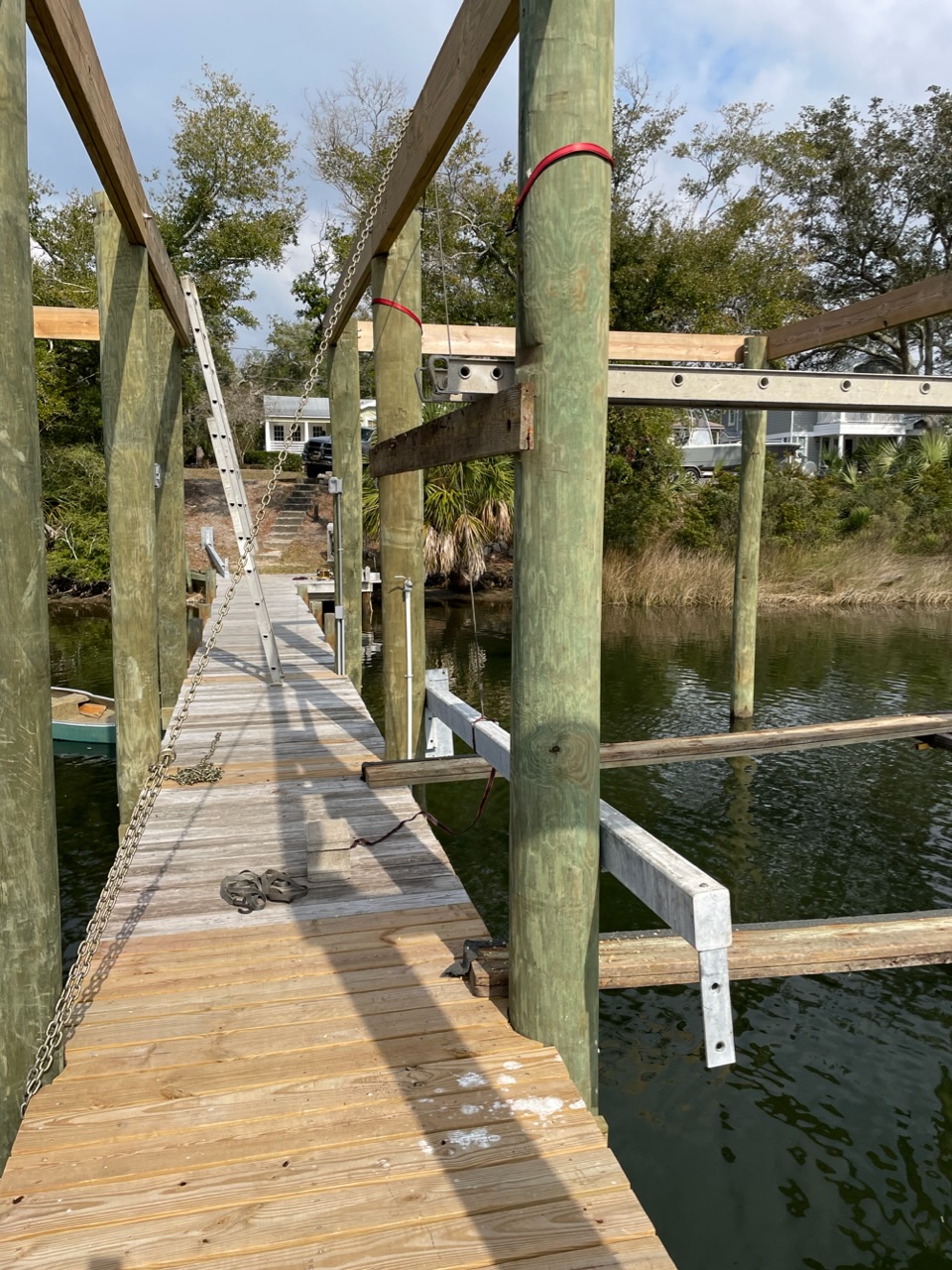 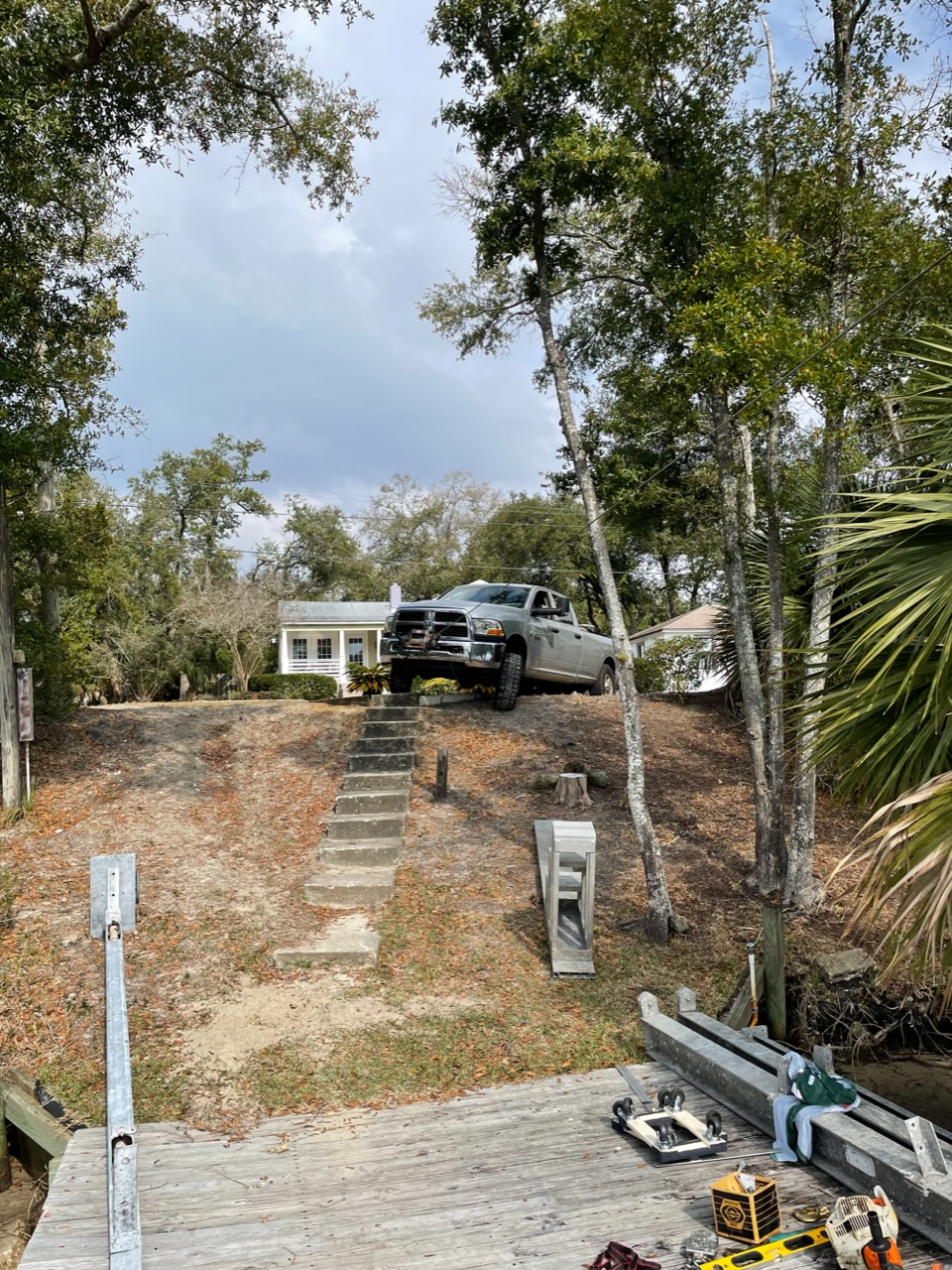 Used these brackets to attach them to the side of the pilings.

After one full day, both sides were up and bolted to the pilings.

On the second day I fabricated some stainless steel U bolts to hold these down to their brackets. Purchased materials for the cables and got those made. The Swage tool will make a man out of you for sure. 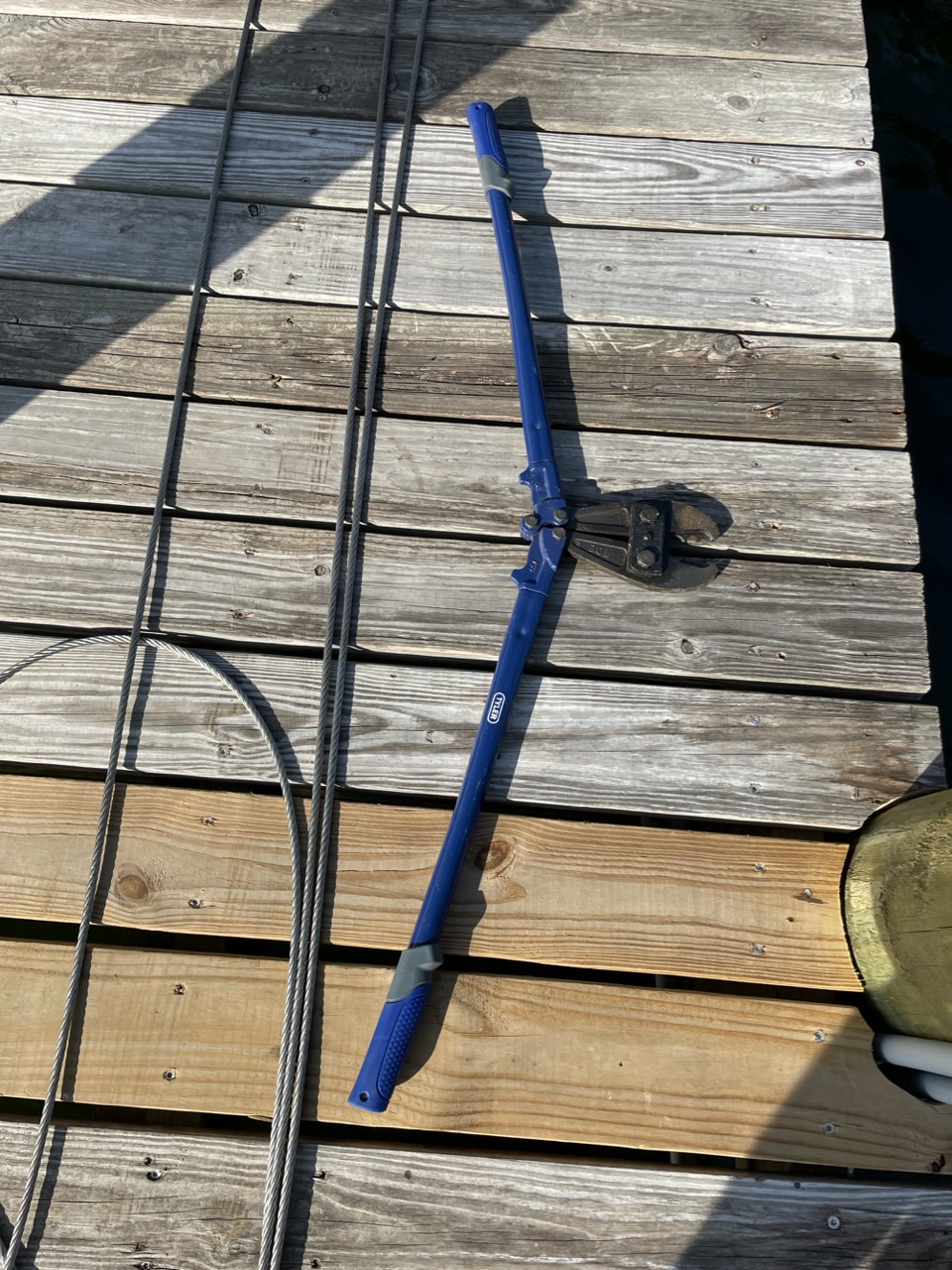 And then what I consider great success, was able to have the cradle bolted together, and supported by the lift by the end of the day. 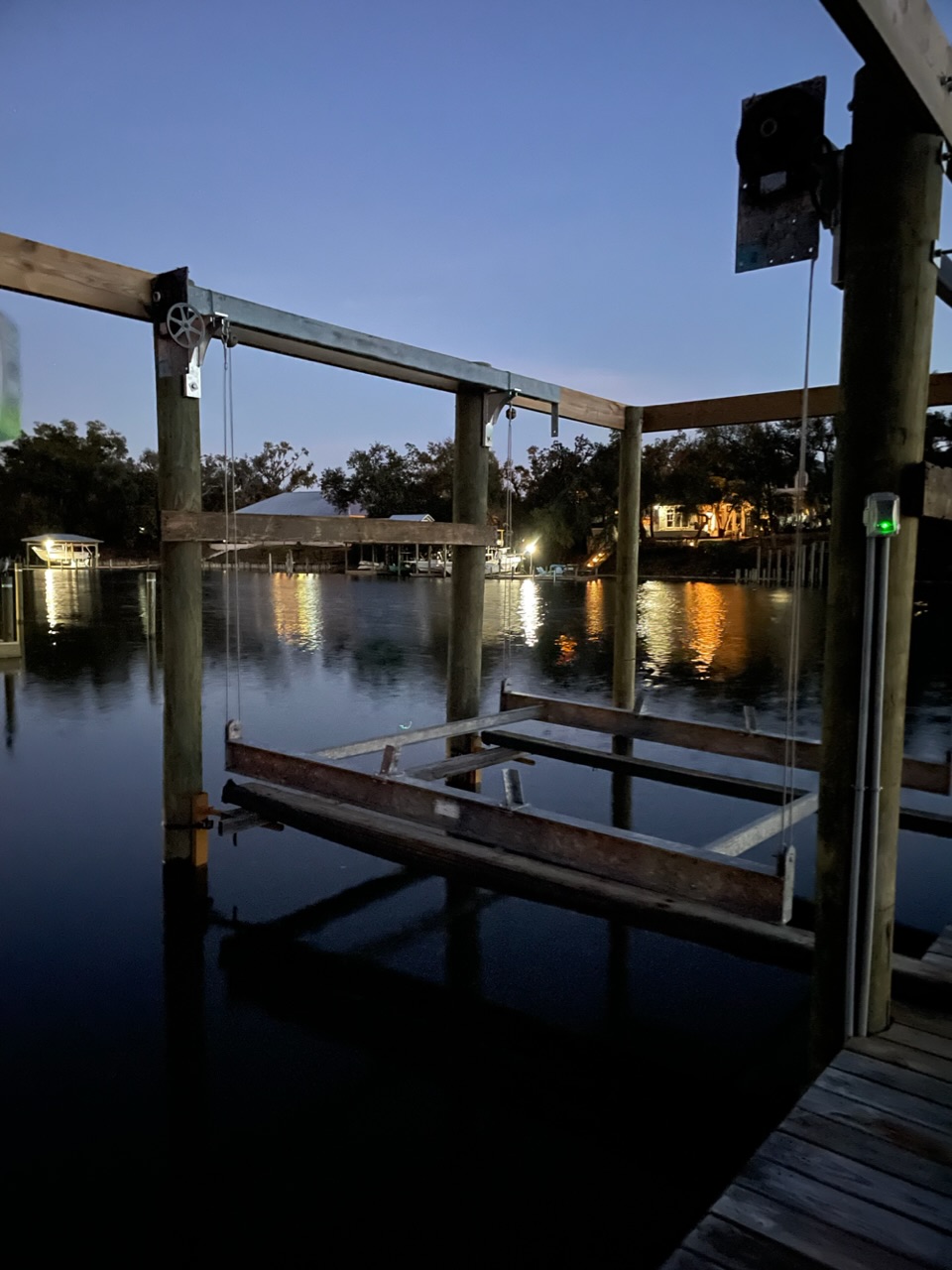 On the next trip, I’m bringing motors down along with the boat will finish the cradle bunks and wire it all up.